By Adam S. Levy For Dailymail.com

Brian Austin Green on Monday got emotional while revealing wife Megan Fox dumped him after a spell of long distance, putting an end to their decade-long marriage.

The 46-year-old actor, speaking on his ‘…With Brian Austin Green’ podcast, confirmed the split but made clear he doesn’t rule out a reconciliation with the Transformers actress, 34, as he says Fox and MGK just remain ‘good friends at this point.’

He said in the podcast that he foreshadowed the couple’s split in a dream while she was away working on a film last autumn, and that they eventually agreed to ‘separate for a little bit.’ 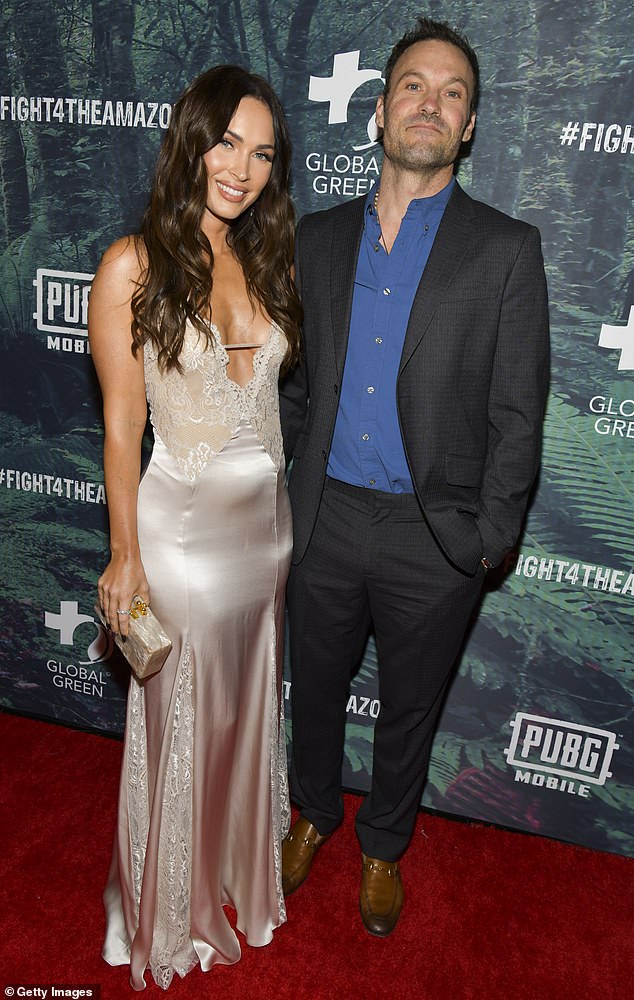 The latest: Brian Austin Green, 46, on Monday got emotional while revealing wife Megan Fox, 34, dumped him after spell of long distance, putting an end to their decade-long marriage

‘About three weeks into her being gone and shooting, I had a dream, which most people dream, but I don’t ever remember my dreams,’ he said. ‘But, I had this dream that she came back from work, and that we were distant, that things were off, that things were weird.’

He said he texted her about the bad dream, but she reassured him things were fine.

Green said that when Fox returned from filming, she wasn’t initially acting like herself, which he attributed to the grind of an overseas shoot.

‘I gave her a few weeks, I figured you know, she’s been out of the country, she’s jet-lagged, she’s been shooting nights, I have to give her some time to recoup a little bit and get back into life,’ he said. 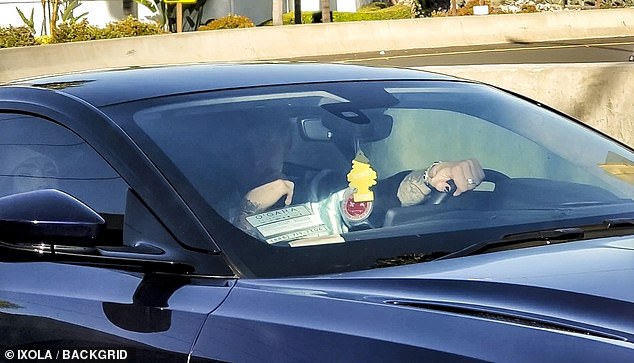 Worth a thousand words? MGK and Fox were seen grabbing coffee Friday in Calabasas 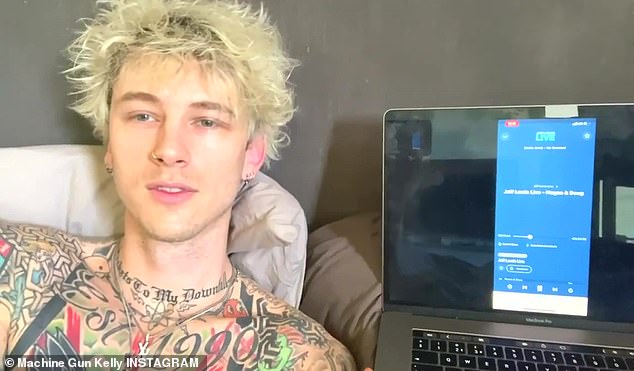 His view: Green said of The Dirt actor, 30, ‘She met this guy, Colson, on set. I’ve never met him. Megan and I have talked about him. They’re just friends at this point’

Green said Fox eventually told him she felt more like herself when they weren’t together.

‘She said, “You know, I realized while I was out of the country working alone that I feel more like myself, and I liked myself better during that experience, and I think that may be something worth trying for me,”‘ he said. ‘And, I was shocked and I was upset about it, but I can’t be upset at her, and I wasn’t upset at her because that’s, she didn’t ask to feel that way, it wasn’t a choice she made, that’s the way she honestly felt.’

He said they mutually agreed to ‘separate for a little bit’ and try and use the space and time to ‘see whatever it is we find.’ 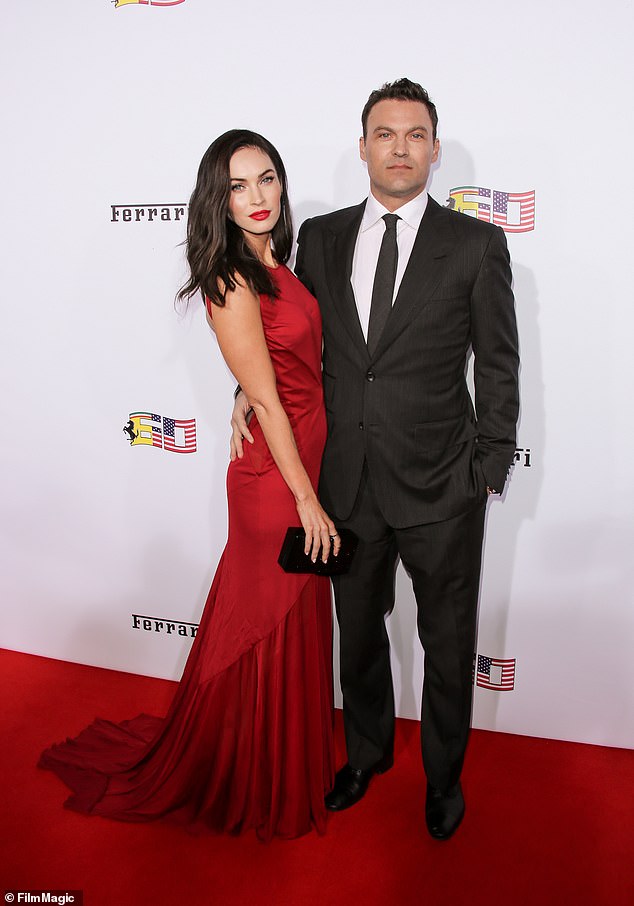 Forging ahead: The veteran actor said that he and Fox are going to continue to attempt to operate, at times, as a family unit for their children. The former couple was snapped in 2014

The actor said he and Fox have ‘really been trying to sort of be apart’ since the end of 2019.

As for Machine Gun Kelly (whose real name is Colson Baker), Green downplayed reports of a budding romance between the two as they worked on the film Midnight in the Switchgrass last fall.

‘She met this guy, Colson, on set,’ he said of the 30-year-old rapper/actor. ‘I’ve never met him. Megan and I have talked about him. They’re just friends at this point.’

Green added: ‘I trust her judgment, she’s always had really good judgment. I don’t want people to think her or he are villains or that I was a victim in any way.’ 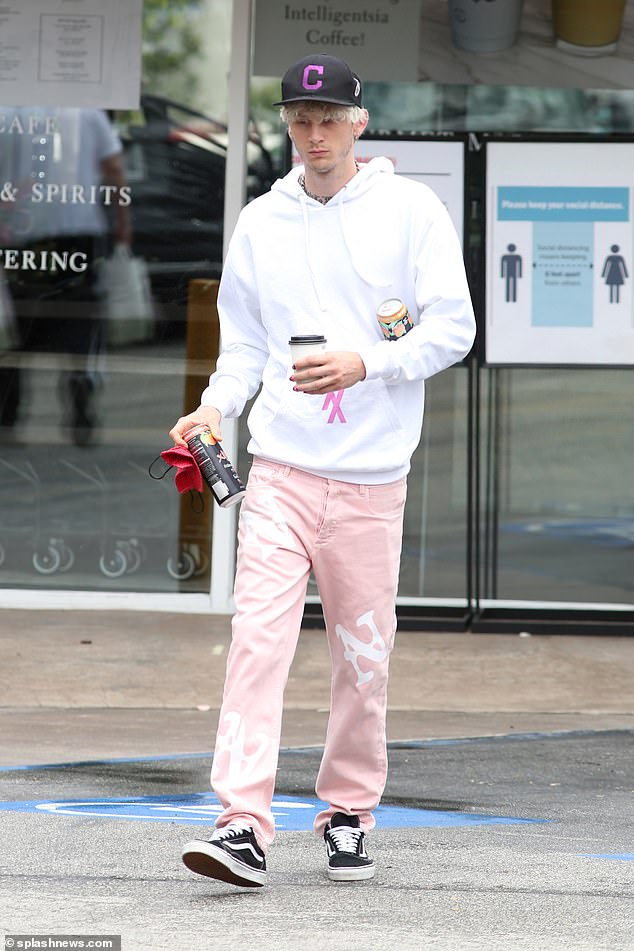 Out and about: Machine Gun Kelly was seen at a market on Monday in Bel-Air grabbing drinks 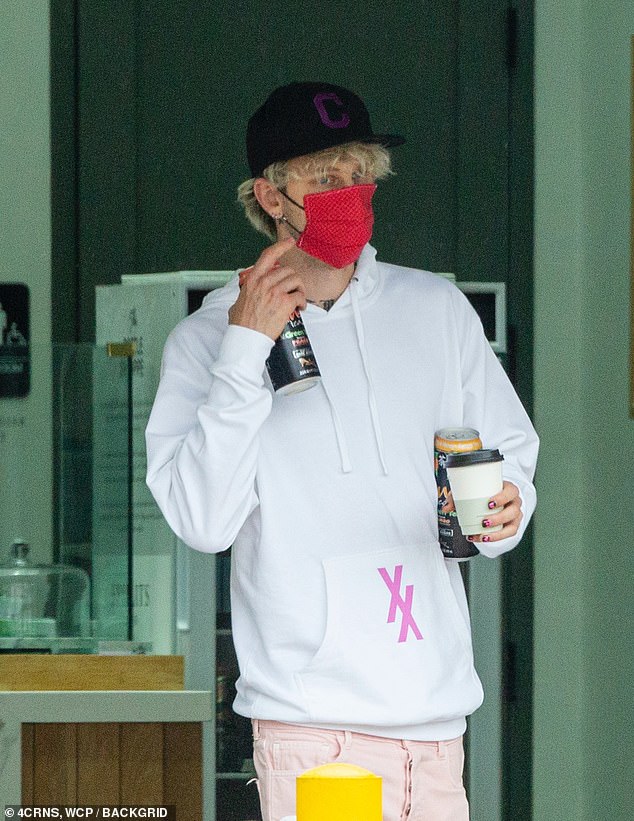 Responsible: The rapper/actor put on a face mask as he headed into the public venue

The veteran actor said that he and Fox are going to continue to attempt to operate, at times, as a family unit for their children, as they will ‘still do family vacations and holidays as a family and really make that a focus for the kids.’

He said he and Fox are aiming to keep the best sense of normalcy possible for their kids: ‘We decided let’s make sure we don’t lose that – that no matter what we’re always friends with each other and we’re a united front with the kids.’

Green said that he was doing his best to adapt amid the difficult time – which coincides with a full lockdown in their native Los Angeles to combat the coronavirus pandemic – as he ventures into a new normal in his family life.

‘It sucks when life changes and something that you’re used to, that you’ve been doing for 15 years, you try and not get rid of but you change, said the actor, who last year appeared in the film Cross 3 and the show Magnum P.I., as well as in the short-lived 90210 reboot BH90210.

He continued: ‘There’s the unknown aspect, there’s that pit in my stomach.’

Green stressed he wasn’t looking for any problems with the Jennifer’s Body actress as they adapt in the wake of their split.

‘I really don’t want Megan and I to be at odds,’ the actor, who played the role of David Silver on the Aaron Spelling 90s hit, said as his voice cracked with emotion. ‘She’s been my best friend for 15 years and I don’t want to lose that.’

Billy Corgan is happy going solo, and he can be spectacular with his band. On Monday night's edition of The...